The Arecibo Observatory (AO) hosted a 12m diameter dish antenna in addition to the 305-m legacy telescope. The 12m telescope was commissioned in 2011. It is fully steerable and currently equipped with room temperature receivers at S (2.1 to 2.4 GHz) and X bands (8.1 to 9.2 GHz) to record dual-polarization signals. Over the past several months, the AO engineering team (Phil Perillat, Felix Fernandez, Luis Quintero and technicians) worked hard to get the X-band system integrated to the 305m IF/LO system and backends (the Mock spectrometer and the VLBI backend). The team also characterized the system for astronomical observations. The astronomy and engineering groups then jointly commissioned the X-band system by performing a variety of observations. Figures 1 & 2 show some of the results from the commissioning observations with the X-band system. We are excited to inform the community that we plan to start regular observations with the 12m telescope from January 2022, including participation in the European Very Long Baseline Interferometer (EVN) network. We have requested NSF funding to upgrade the room temperature front-end with cryogenic, wideband (2.3-14 GHz) receivers, which will significantly improve the performance of the 12m telescope. 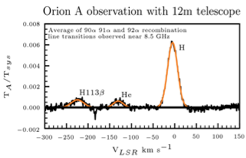 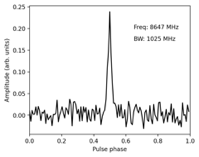 Figure 1: (Left) Recombination lines observed toward Orion A at frequencies near 8.5 GHz with the 12m telescope (spectrum by Anna McGilvray). Three alpha transitions were observed simultaneously with three Mock spectrometers. The spectrum shown is the average of the 3 alpha transitions. Both hydrogen and helium lines were clearly detected. The H113β line was present in one of the spectral bands, which is seen in the average spectrum near -220 km/s (Right) Average pulse profile of Vela Pulsar observed near 8.7 GHz with the 12m telescope (profile by Ben Perera). The observations used 7 Mock spectrometers configured in pulsar mode spanning a frequency range of about 1 GHz.

Figure 2: Very Long Baseline Interferometry (VLBI) observations with the Arecibo 12m telescope. The 12m telescope results are from the November 2021 European VLBI Network (EVN) 3.6 cm Network Monitoring Experiment (observations and plots by Sravani Vaddi, Anna McGilvray, and Phil Perillat at Arecibo, together with Marjolein Verkouter, Bob Campbell, and Benito Marcote atJIVE). The observations were carried out with the VLBI backend consisting of a Roach Digital Backend and Mark 6 recorder. (Top) Self bandpasses from the 12m telescope data. (Bottom) Amplitude and phase of the cross correlation between the 12m telescope and the Effelsberg telescope is shown on the left. Only the right circular polarization (in red) shows correlation; the backend was not configured for the left circular polarization. For comparison, the correlation of the Effelsberg telescope with the 32m Badary telescope in Russia is shown on the right.